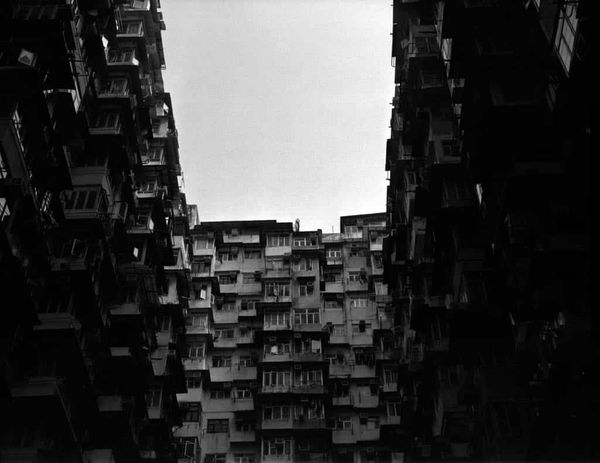 Hong Kong is a city known for its spectacular approach to the urban form.  With more than seven million people living in close quarters in a city that has roughly the same land mass as Vancouver – but with a lot of that land reserved as park – the city can get crowded, quickly.  Following China’s cultural revolution, thousands of refugees streamed into Hong Kong, and the city was faced with an enormous housing crisis.  Massive blocks of flats were the answer.

Some of the most famous apartment blocks in Hong Kong can be found in Quarry Bay.  Tucked into a tiny corner on the north side of Hong Kong Island, the neighbourhood is really only a few streets across, from ocean to mountain.

It’s kind of strange – these buildings feel like they should be claustrophobia-inducing, but they are not. They are surprisingly spacious outside, and underneath, there is a shopping plaza. There is a public courtyard, and there are retail shops everywhere. The plentiful restaurants mean you never really need to try cooking on your own.

From time to time, a new urban tower pops up next to one of the older, post-revolution towers.  The contrast between the two can be stunning.

Sometimes, in the middle of these towering blocks, even the sun high at noon can feel like it is dusk. It is almost of a perpetual twilight. At first, you might wonder why anyone would ever want to live there. Then you may cast your mind back to the trek that thousands of refugees made across China, just to escape to the British colonial outpost along the Fragrant Harbour. Maybe it is not so much a mystery.